I like chess puzzles and if you are like me you know that “mate in 3” can have only a limited number of solutions and usually can be solved within, say, 10 to 15 minutes (master level players will of course be much faster). However, the following puzzle turned out to be much more tricky, at least to me (I am only a club level player). Before going on, give it a try:

Black to move and mate in 3 moves: 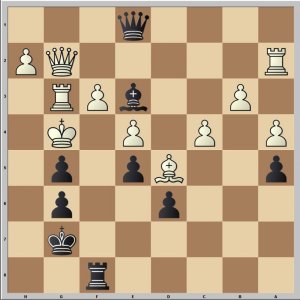 If you can’t wait for the answer, you can see it fully described here by Joe Wiesenthal, the prolific economics editor of Business Insider. As he says:

“the eminent chess player and commenter Susan Polgar posted on her blog the following:

Black to move and checkmate in 3. Please no computer analysis. This is a very cool checkmate. Try to find it for yourself.

And it wasn’t! In fact I spent the evening looking at it yesterday without getting it.”

But now I am intrigued – exactly why is this elegant little puzzle so surprisingly hard?

And that I find to be an even more interesting puzzle, one of human psychology. I think a hint can be obtained by trying to solve an entirely different, almost trivial, problem in arithmetic. Try this:

How much does the ball cost?

If you answered, like most people, 10 cents then you are wrong!

This problem comes from the research of Shane Frederick, a collaborator of Daniel Kahneman, one of the world’s top cognitive psychologists. Frederick’s paper, “Cognitive Reflection and Decision Making” (Journal of Economic Perspectives, Volume 19, Number 4, (2005) pp 25–42) describes what might be happening in such problems.

Here are two more arithmetic problems from the paper:

If it takes 5 machines 5 minutes to make 5 widgets, how long would it take 100 machines to make 100 widgets?

If you said 100 minutes for the widgets or 24 days for the lake, then once again you got the wrong answer. But you are not alone – a surprising majority of students from elite universities, including maths and physics types, get these elementary problems wrong (data in the paper cited above and various follow-up papers).

So what is going on?

Our brains can be thought of as consisting of two separate but interacting systems. As Kahneman explains in his brilliant Nobel lecture:

“The operations of System 1 are fast, automatic, effortless, associative, and difficult to control or modify.

The operations of System 2 are slower, serial, effortful, and deliberately controlled; they are also relatively
flexible and potentially rule-governed.”

System 1 can be thought of as the intuitive system and System 2 as the reflective system – what we normally call “thinking”. Obviously, neurons are firing in both cases, but System 1 feels so effortless that most people don’t realize the massive extent of neural processing involved in, say, seeing that we are looking at a chair, since such acts of perception are accomplished by the fast System 1.

It is likely that System 1 has “hardwired” the critical processing that our ancestors needed frequently, like perceiving objects and making very quick (“intuitive”) judgments. It is basically a pattern recognizer. But it can also learn new things after sufficient repetitions – it is where our habits reside.

System 2 is more flexible and algorithmic computer in its style, albeit a very slow computer. The overall executive control also is a part of System 2.

As the Frederick paper explains, the three arithmetic problems are

“easy” in the sense that their solution is easily understood when explained, yet reaching the correct answer often requires the suppression of an erroneous answer that springs “impulsively” to mind.

And that is exactly what I guess  is going on with the chess puzzle above.

Every chess puzzle lover “knows” that a discovered check pattern is often the heart of many a pretty mating sequence. And sure enough, there is a very seductive discovered (and, indeed, double!) check available on the second move after the obvious (and correct) rook check at first move.

So our intuitive pattern detector jumps to the conclusion that this discovered check just has to be part of any solution. It leads us down the proverbial garden-path and we tend to waste of a lot of time on this dead-end.

The solution to the chess puzzle finally emerges only after we have somehow (hours later in my case) managed to suppress this discovered-check. After that happened me – hours later – I finally focused on the fact that the white king is completely locked-in after the rook check on the first move. And after this “aha” moment, finding the two moves by the black bishop that deliver the coup-de-grace was not too hard.

Of course a computer would solve this problem in milliseconds, since the search tree is so small. And the computer, in a sense, is all logical system 2 with no intuitive system 1 to mislead it!

Unlike the arithmetic problem, there has been no research on this chess puzzle to my knowledge, so this explanation of why this simple enough mate is so hard for humans is just my best guess at this point.

Just in case this discussion makes System 1 appear dumb, it is worth keeping in mind that artificial intelligence programs still cannot come anywhere close to being able to perceive patterns that are trivial for humans. It is also the likely source of creative insights and the two systems together are responsible for all the glories of human achievement.

Incidentally, if you enjoy this sort of stuff, Kahneman’s Thinking, Fast and Slow is a true masterpiece and easily one of the best books I have read in the last few years.